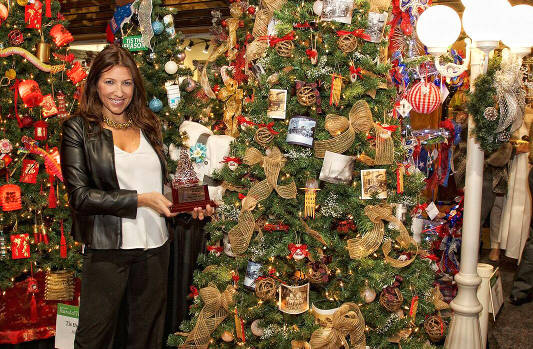 The Festival of Trees annual premier event, the Taste of the Festival, featured Celebrity Chef Jen Royle. The Taste is the most exciting evening at the beginning of each year’s Festival of Trees.  It’s a gala event featuring food items from some of the region’s best restaurants and caterers.

After 13 years of Emmy Award winning sports reporting, Jen Royle followed her dream by auditioning for ABC’s hit cooking series, “The Taste” where she cooked into the finale, surpassing 19 other chefs. After “The Taste” aired in 2015, Jen attended The Cambridge School of Culinary Arts and then joined world-renowned chef Mario Batali at his new Boston restaurant, Babbo Enoteca. It was then she realized that feeding people was her true calling, which led to opening her own private chef company, “Dare To Taste.” The success of Dare To Taste has been nothing short of extraordinary. Over the past three years, they have cooked for over 200 families throughout New England as well as some of the top companies in Boston.

Chef Royle visited with each of the Taste’s contributing eateries – tasting their culinary creations at each stop! She mingled with the events 400 guests and enjoyed the beauty and creativity of the Festival’s trees and wreaths. “We’re honored to have Jen as our guest and we’re happy to recognize her success with Dare to Taste,” said Festival president Tom Lussier.

Chef Royle chose “A Look Back,” presented by the Methuen Fire Department, as her favorite tree.

The Festival would like to thank Chef Jen Royle and the 25 talented and generous local eateries for helping make this year’s Taste of the Festival so successful.